Why Are So Many Retail Chains Going Out Of Business?

At this point, it is no surprise to say that retail stores in the United States are beginning to vanish. Eventually, retail shopping centers will become similar to steel mills and other types of manufacturing; they all will be gone. Stores such as Kmart, Sears, Toys R Us, and many other chains have disappeared because of many reasons, and those stores are left abandoned and deteriorating for decades. One example of a failing shopping center is the Shenango Valley Mall in Hermitage. One of the only large stores left is J.C. Penny, as both of its other anchor tenants, Sears and Macy’s, have left in the past five years.

The case of the Shenango Valley Mall is much different than other shopping centers and malls in the Rust Belt area. Many malls and shopping centers in and around Pittsburgh have closed because there is too large of a retail presence in the area due to many people completely moving out of the area. The case of the Shenango Valley Mall is actually the complete opposite. The population of Mercer county has only slightly declined over the past 40 years, from about 125,000 in 1980 to about 110,000 today. In and around Mercer county there is a pretty low retail presence. In fact, some stores and restaurants are moving in the area, but not on the mall property.

Its a fact that malls are declining not only due to online shopping becoming huge in the 21st century, but also because styles are changing at a rapid pace. As stated above, another factor has to deal with there being too large of a retail presence in the surrounding area, which was the case of the Century III Mall in West Mifflin, south of Pittsburgh. The Great Recession of the early 2000’s also had a huge part in the downfall of retail stores in the area.

Toys R Us filed for bankruptcy just last year, and closed all of its stores by the summer of this year. They had been struggling for over a decade, as they were $5 billion in debt. The debt was caused by a leveraged buyout, which is when a company buys out all of its stocks and changes from a public company to a private company. Billionaire Elon Musk sparked controversy in August by proposing a leveraged buyout of his company, Tesla Motors, to silence all of the critics of his company. As a result he was fined $20 million and forced to step down as chairman of the company.

Some retail centers that have been abandoned are beginning to come back to life, however. The site of the abandoned Owings Mills Mall in Owings Mills, Maryland is being converted into apartment buildings and restaurants. A project similar to this would be able to bring back life into the sites of malls such as the Shenango Valley Mall, and a project like this (in a small scale) would be great for where the former Towne Mall is in New Castle.

New Castle is in a good position to be able to come out of its Act 47 bankruptcy status, especially with jobs and tourism beginning to rise in the surrounding counties with the Shell plant being built in Monaca, as well as. the mini casino being built just south of the county line. Developers need to begin buying up property in New Castle while its still at a low cost, and convert it to something that will influence other developers to come to town. Downtown New Castle has the potential to become an extremely great area, with hotels, new apartment buildings, and new office buildings, as long as developers begin to see its commercial potential. 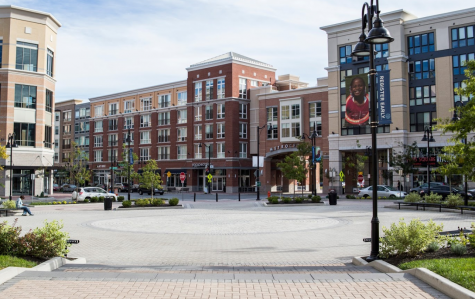 Above Image is MetroCentre at Owings Mills