The Facts on Reopening the Economy During the COVID-19 Pandemic

Many Americans and Pennsylvanians alike are eager to reopen businesses that are considered ‘nonessential’, which are not important to maintaining health. While President Trump, as well as many leaders in local and state governments, wants to reopen the economy as fast as possible, it certainly won’t be a task that takes a short amount of time to do. These businesses will have to put into place dozens of measures set forth by the CDC and their state departments of health, which of course takes time to do. A huge issue, however, is that some businesses and individuals will not follow these guidelines set in place by those agencies. This, in return, spreads the virus more quickly.

In Europe, by simply looking at the statistics you can tell which countries were under lockdown and which weren’t. For example, Sweden, which never closed schools or businesses, has one of the highest COVID-19 death rates in the world at around 12.5%. Compare this rate to some of its close neighbors: Norway is one of the best examples of this, which after closing businesses on March 12, has a death rate of only about 2.7%.

Anti-lockdown protests are breaking out across the country, and these protests are helping the virus spread. The Guardian reports that these protests may have spread the virus widely, due to these individuals traveling to the events in major cities and state capitals. After the April 19 protest in Denver, devices reached other states including Wyoming, Nebraska, Oklahoma, New Mexico, and Utah. Without getting into the politics of them, many of these protests are ignoring social distancing guidelines and some don’t wear masks. If one protestor unknowingly has COVID-19, hundreds of others could have contracted it as well.

Truth is, the pandemic is only barely slowing down in Pennsylvania, and not at all nation-wide. Italy, which became infamously known as a hotspot for COVID-19 in late March has just begun its second phase of reopening on Monday, May 4, with millions going back to work, public transport restored, and businesses opening. Italy is only getting around 1,000 new cases of the coronavirus every day, compared to its peak in late March of over 6,500. The country is also just having around 200 new deaths per day. If we blow those numbers into proportion, comparing Italy’s population to the United States’ population (60 million : 330 million), that means that in a perfect society, statistically, the U.S. should peak at 35,750 cases per day. However, the U.S. has already surpassed that number at least four times, the first of which being on April 10 and the most recent on May 7. Furthermore, if you look at a graph of new COVID-19 cases in Italy, you can see the sharp rise and the subsequent decline due to strict stay-at-home guidelines. Compare that to a graph of Cases in the U.S., which has been rapidly rising and falling every few weeks.

Another major statistic is that while our governments are ready to reopen, and I don’t mean only the Federal government, but state governments too, citizens are not. According to the New York Times and Pew Research, over two-thirds of Americans were concerned that state governments would reopen their economies too quickly. Another survey from Forbes Magazine says that 81% of Americans would rather wait until it’s safe before reopening our economy. Dr. Anthony Fauci, leader of the National Institute of Health, stated on May 5 that it is “a bit overly optimistic” for many parts of the country to reopen in May, and only 15% of those surveyed expect public life to resume in the next month.

Business owners aren’t excited to open either. Todd Graves, CEO of popular Louisiana-based chicken finger chain Raising Cane’s (read my article on Cane’s here), stated in an interview with Fox News that he is not in a hurry to reopen. He says that he would rather stick to the drive-thru format for the time being, which helps protect customers and crewmembers from the virus. The company claims to have not furloughed a single employee due to the pandemic to date, and whenever they are not busy, crewmembers are assigned the task of making masks that will be donated to local hospitals. He also said in an interview with Yahoo Finance that whenever authorities say that you can reopen, other CEOs should find a way to execute an “extremely safe way to open your own restaurants”. Graves also estimated that most restaurants could be open by June 1, but he cautions them not to open too quickly if they aren’t ready.

The United States is one of just a few countries rushing to reopen. British Prime Minister Boris Johnson is keeping restrictions on social and economic activity in place for “the long haul”, the Independent reports. He said that a vaccine could be more than a year away and may never arrive, and released a 60-page COVID-19 recovery strategy document, setting guidelines for changes in rules to lockdown rules to apply in the United Kingdom. It includes a return to work, when and where it is safe, for those unable to do their jobs from home. The government is also advising the public to wear face-coverings in public transport and stores. Johnson himself has recovered from COVID-19 after being diagnosed with the virus and admitted to intensive care in early to mid-April.

Another world leader who has been impacted by COVID-19 is Canada’s Prime Minister Justin Trudeau. According to Business Insider, the leader warned that if Canadian provinces open too quickly, a second wave of the pandemic could send Canada back into confinement. He said that in many provinces, they still are not recovering from COVID-19 and reopening should be gradual. A report by CTV, Canada’s public broadcasting company states that the Institut National de Sante Publique du Quebec said that if lockdown measures are lifted soon, the metropolitan area surrounding Montreal could see 150 daily deaths by the end of June, in addition to over 1,000 new cases daily.

Truth is, these stay-at-home orders are preventing hundreds of thousands of deaths. The Big Cities Health Coalition released estimates that these orders prevented 2.1 million hospitalizations and over 200,000 deaths in 30 major cities in the US. The most alarming statistic comes from Los Angeles County, California, where it is estimated that 45,762 lives were saved due to their early action. Click here to see the full estimates.

Here’s some good news: vaccines and antivirals are being successfully tested. Chemists at Texas A&M University have been focusing all of their studies on researching remedies for COVID-19. A research team led by Wenshe Ray Liu has found one of the world’s first promising antiviral drugs to treat COVID-19. The drug, called remdesivir, was originally created in response to the Ebola pandemic in 2014 but is now expected to be used against the novel coronavirus.

Initial clinical trials have concluded that remdesivir reduced the amount of time it takes to recover from COVID-19 to eleven days, from an initial average of fifteen days. The study also concluded that there is a lower death rate among individuals who are prescribed with remdesivir compared to those who were not.

However, Liu stated that remdesivir should not be the only treatment manufactured to fight COVID-19. While other drugs, such as hydroxychloroquine and remdesivir, have initially proved effective, more options are going to need to be generated. This is in part due to SARS-CoV-2 being such a contagious and unprecedented virus: some strands of the virus could be resistant to certain drugs. A drug-resistant strand could rapidly spread and cause drugs such as remdesivir to become obsolete. With tens of thousands of researchers across the globe working to find medications to treat COVID-19, it is surely possible that dozens of drugs could be manufactured to help fight off this deadly and contagious virus.

It was also just reported that the first company in the US to begin human testing for a coronavirus vaccine has reported positive results. The company, Moderna dosed 45 patients between the ages of 18 and 55 with varying doses of the vaccine. It concluded that both 25mg and 100mg doses of the vaccine, known as mRNA-1273, have given levels of antibodies of SARS-CoV-19 similar to patients who have fought off the virus. Patients who received higher doses of the vaccine had more severe side effects. The next phase of their trial will give the vaccine to a larger test group of 600 subjects, which is set to begin soon.

Until vaccines and antiviral drugs are available to the public, it would likely be in everyone’s best interest to only go out when necessary. That means try to limit contact with friends and others who don’t live in your household as much as possible. As virus infections begin to decline, we don’t to be sure that we don’t have another resurgence in COVID-19 cases. While you can still go out and see people, just all I ask, as the son of two healthcare workers, is that you please limit close contact as much as possible. Stay safe. 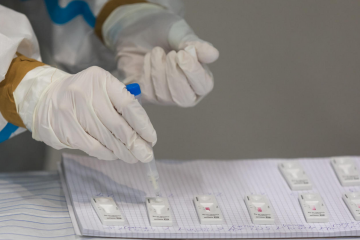